There’s never a dull moment in Chandigarh’s burgeoning restaurant scene, especially when it comes to new launches. The latest to open its doors to diners in Chandigarh is ‘Dhaba Estd 1986’. For the unaware, ‘Dhaba Estd 1986’ was born in 1986 and is an offshoot of the iconic property at Hotel Claridges in New Delhi. This dhaba, assures the team behind it, carries with it a legacy of over 30 years of experience in the hospitality and food business.

The newly launched restaurant in Chandigarh is situated in Sector 7 and has been designed on a ‘Dhaba te Theka’ concept. While most of us are familiar with brands like ‘Haveli’ that have endeavoured to present dhaba-like meals in modern, hygienic environs, ‘Dhaba Estd 1986’ goes a step ahead. The earthy interiors have been accentuated with dollops of quirk and colour. The food menu is robust and while the ‘Theka’ will dish out alcoholic beverages in some time, the mocktails are refreshing.
“As many would be aware, ‘Dhaba Estd 1986’ is already present in Delhi NCR, Pune, Chennai, Hyderabad and Bengaluru and I was very keen to bring it to Chandigarh as it’s a perfect fit for the region’s palate,” says Puneet Gupta, the franchise owner of the Chandigarh outlet. 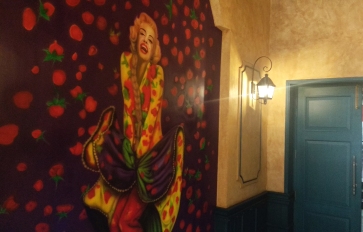 Designed like a traditional home in a pind (village) in Punjab, you will notice glass doors, niches and nooks and of course a courtyard too. To add to the drama, there’s a truck parked in as well and you can dine in it too. The interiors will delight lovers of the Instagram app as there are many picture-worthy elements dotting the place, including Marilyn Monroe in a salwar kameez!
The food menu, explains Gupta, is inspired by travels down the highways of north India as well as old towns popular for unique recipes. The dishes on the menu have been categorised into three parts – ‘Tandoor’, ‘Tawa’ and ‘Patila’. Specials from the ‘Tawa’ include ‘Tandoori Bhune Aloo’ served with a delectable ‘saunth’ chutney; ‘Veg Galouti’, ‘Mushroom Hara Pyaza’, ‘Galouti Kebab’ and ‘Tawa Mutton’ are some of the front runners here. 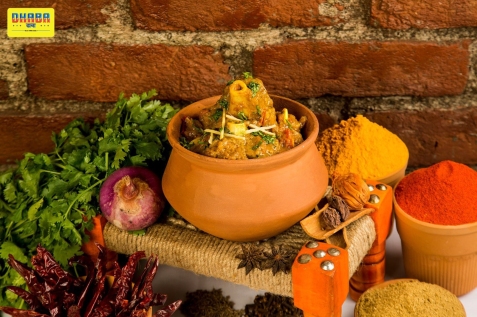 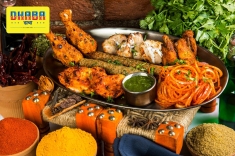 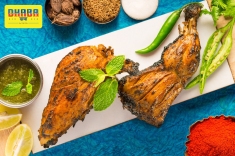 The ‘Tandoor’ section dishes out a plump line-up which includes ‘Amritsari Kukkad’, ‘Tandoori Prawns’, ‘Highway Chicken Tikka’, ‘Amritsari Machhi’ et al. Vegetarians can choose from ‘Lal Mirch Ka Paneer Tikka’ and ‘Dhaba Paneer Tikka’. If you are looking for quintessential Dhaba meals rustled up in a ‘patila’ then do try the signature ‘Handi Murgh’ and ‘Handi Gosht’. There’s also ‘Dhaba Balti Meat’ and ‘Butter Chicken 1986’. For vegetarians, there is ‘Lahsooni Palak’, ‘Paneer Makhan Masala’ and ‘Kanastari Baingan Bharta’. The latter is a signature preparation and the eggplants are cooked in the tandoor giving it an unmistakable smoky aroma.

Pair up your meals with the restaurant’s version of traditional beverages like ‘Virgin Paan Mojito’, ‘Kaala Khatta’, ‘Ganne ka Sa Ras’, ‘Meerut ki Shikanji’ and more. ‘Dhaba Estd 1986’ also dishes out a buffet. Given that the restaurant specialises in Punjabi fare and quirky interiors, it will appeal to your NRI relatives and friends too. A meal for two here will cost Rs 1,500.